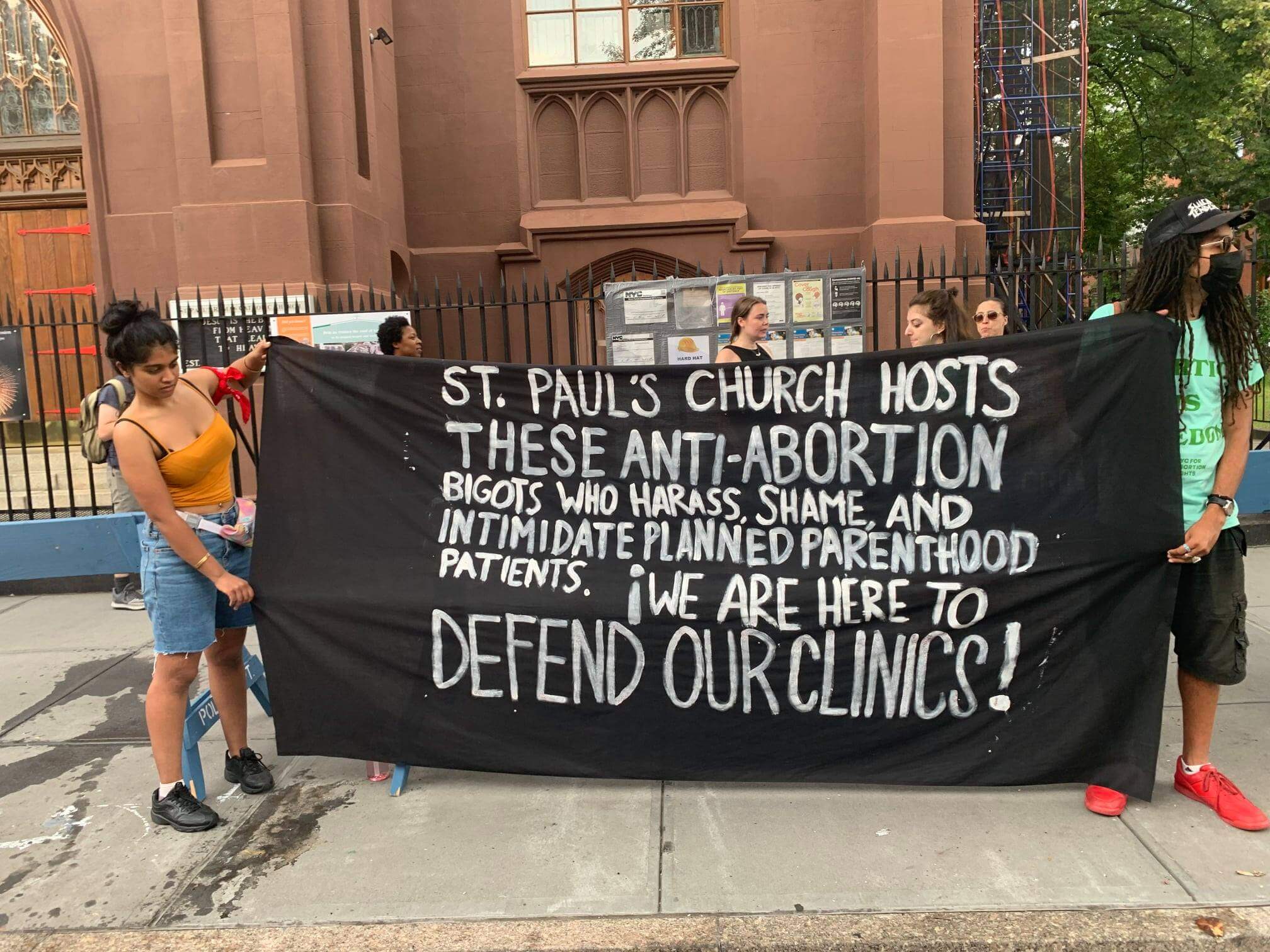 On August 14 in Cobble Hill, the NYPD sent its militarized Strategic Response Group to crack down on a protest opposing harassment at the nearby Planned Parenthood.

Last Saturday, NYC for Abortion Rights counterprotested the Archdiocese of New York’s “Witness for Life” at St. Paul and St. Agnes. The Strategic Response Group arrested two of our members and held them for hours at the 76th Precinct before releasing them on charges of disorderly conduct, resisting arrest, and obstruction of pedestrian traffic.

We’ve been counterprotesting the Archdiocese’s clinic harassment for four years now. Billed as “peaceful prayer,” the Witness for Life is a weekly mass that ends in a march to Planned Parenthood, where clergy and parishioners—frequently over a hundred of them—assemble to stigmatize abortion and pressure patients to give birth against their wills.

Our action on August 14 began like all of the others: we met the Archdiocese’s procession of forced birth harassers in the streets on their way to Planned Parenthood. They were led by Friar Fidelis Moscinski, who routinely invades clinics to accost patients, refusing to leave “until the abortions stop.” We confronted them on the sidewalk, walking slowly backward, with pro-abortion chants and signs. We hardly need to say that we were nonviolent.

The only violence that’s ever occurred at an action of ours came from their side in 2018, when a parishioner shoved and punched several of us and sent one person to the hospital with a concussion.

But this time, the Strategic Response Group showed up—a particularly violent and well-armed unit of the ten-billion-dollar NYPD, infamous for systematically abusing protesters throughout the 2020 Black Lives Matter uprising.

In response to a few dozen community members standing up for reproductive justice, they pulled up with a fleet of vans, masses of zip ties, and LRAD sound cannons. They plucked out two of us—in one case, with six heavily armed male cops descending on one small woman in a T-shirt. And they cleared the way for a man who’s been arrested more than a dozen times for shutting down abortion clinics to stand directly by the clinic entrance.

Where did this wildly disproportionate response come from? On July 10 and the month before, too, they were apparently content to let us counterprotest as we’ve always done—though, maybe notably, for the first time in Brooklyn, where as of this summer the Archdiocese has expanded its Witness for Life (along with the Bronx and Staten Island) after years of targeting the Bleecker Street Planned Parenthood.

But it’s clear that the Archdiocese has had enough of our opposition to their clinic harassment and made a few phone calls to the NYPD.

Leading up to our July 10 counterprotest, they met with the police and made sure to get lots of footage on the day of, which they circulated widely in no fewer than six National Review op-eds. They were all written by a member of the Archdiocese’s Pro-Life Commission named Kathryn Jean Lopez, who spun our demand that they leave patients alone as “bloodthirsty” religious persecution requiring police intervention. She smeared us as “another example of the darkness that is strangling New York City,” called on Eric Adams to “stand up to an increasingly bloodthirsty Left,” and extolled the NYPD for keeping them safe from us. And then, once their PR job was done, the Strategic Response Group conveniently appeared to crack down.

We abhor the cowardice of the Archdiocese of New York. The moment that this world-historically wealthy and powerful patriarchal organization (and the city’s largest landowner) feels threatened by everyday people—who simply refuse to concede that it’s benign for the Catholic Church to stigmatize us in the streets for exercising bodily autonomy—they call in the most repressive arm of the state to beat us back, while continuing to claim religious persecution.

Meanwhile, it’s our bodies and lives that are under attack, at a time when the Supreme Court is months away from deciding a case that would overturn Roe; when Texas is placing $10,000-dollar bounties on the heads of anyone who helps someone have an abortion after six weeks; when anti-abortion violence from Proud Boys is overwhelming clinics; and the right is following its anti-abortion playbook to systematically attack, surveille, and demonize trans youth.

But our protests have taught us that the people are on the side of reproductive freedom and bodily autonomy. Even Kathryn Jean Lopez has noticed. Clinic harassment is “a threat to anyone who wants abortion on demand,” she wrote, “as our protesters—and seemingly a whole lot of the neighbors—do.” It’s true: free abortion on demand is popular, and passersby are outraged to learn that St. Paul and St. Agnes hosts clinic harassment; we can’t count how many of them have spontaneously joined our side at actions.

We demand that the Archdiocese of New York listen to community members and end its campaign of forced birth and harassment against abortion patients, in Brooklyn and every borough. We demand that St. Paul and St. Agnes stop hosting clinic invader Fidelis Moscinski, and that he stop leading anti-abortion marches to the doors of clinics. We demand that they leave us to make decisions about our own bodies, lives, and labor in peace. And we demand that the NYPD stop facilitating clinic harassment.