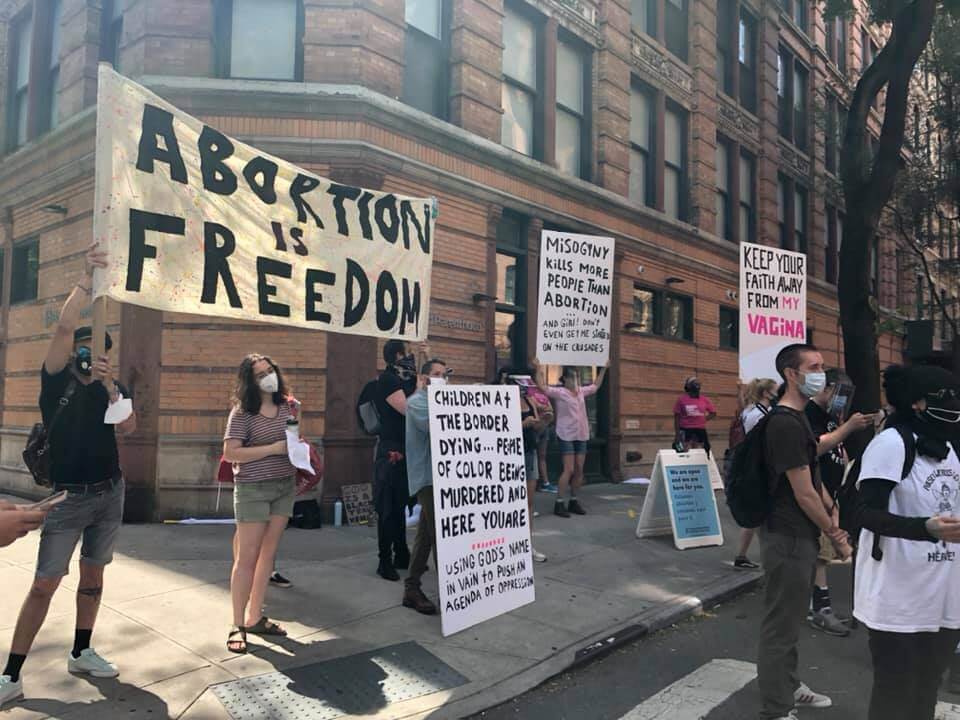 Why do clinics need to be defended?
Anti-abortion harassment targeting clinics is one of the most pervasive forms of right-wing violence around today.

When abortion became legal in 1973, freestanding clinics filled a critical service gap, providing abortion services when hospitals could not—or would not—do so routinely. Today, most abortions still take place in clinics, but intense state regulation and virulent anti-abortion opposition have made them highly stigmatized and marginalized spaces. Their physical isolation makes them an easy target. Common forms of violence include blocking access to and invasions of clinics, stalking, death threats, and bomb threats. And like other forms of right-wing violence, it’s on the rise—34% of clinics reported severe violence in 2016, up from 20% in 2014. Antis have effectively claimed abortion clinics as their own, created a powerful narrative of shame, regret, and stigma around abortion, and radicalized new generations of right-wing misogynists who are willing to use violence. We defend clinics because we want to fight the right and win a world with free abortion on demand, without apologies.

I’ve heard of clinic escorting; how is it different from clinic defense?
Sometimes it’s hard to tell the two apart. Escorts typically volunteer directly for the clinic, and they have more of a direct service role; their primary responsibility is to shield patients from protestors and usher them safely into the clinic. But as clinic defenders, we are responding to the anti-choice politicization of the clinic. We believe that public protest is a tool for building social movements, and that ignoring anti-abortion protesters will not make them go away. In our actions, we confront antis directly, in the tradition of clinic defenders in the 1990s who mobilized in huge numbers against the violent right to keep clinics open. As right-wing attacks on clinics are on the rise again, we aim to reclaim the space in front of clinics, end the shame and stigma around abortion, and build a grassroots movement for abortion access.

What does a clinic defense look like? What sort of tactics do you use?
We sing civil rights songs to drown out the noise of antis and block their propaganda with supportive signs of our own. We take up space in front of the clinic while keeping the entrance clear so that antis are forced to move farther away. And we get creative: we’ve exposed “sidewalk counselors” with signs calling them out as harassers; held up sheets to block graphic imagery; and moved the fight to their own territory by confronting them at the churches where they organize before parading over to the clinic.

Doesn’t clinic defense just add to the chaos in front of clinics and make it more stressful/confusing/intimidating for patients to get in the door?
Antis are out there with the specific goal of making patients uncomfortable, and that won’t change if we don’t show up. We’re proud to offer a positive, supportive message to patients to counteract their intimidation campaign, and we make sure that someone is there to intervene when the antis are targeting specific patients for harassment. We are sensitive to the concern that our presence could add to the chaos, and we adjust our tactics to mitigate that. However, we know that patients will be dissuaded from accessing reproductive health services as long as the antis go uncontested, and there’s a much greater risk in failing to confront them wherever they go.

Why do you continue organizing clinic defenses when organizations like Planned Parenthood oppose this strategy?
Mainstream reproductive rights organizations have promoted a purely electoral strategy and discouraged direct action (especially anything that directly confronts antis) for many years; but mass dissent won Roe, not electoral politics, and we’ve only seen our access to abortion erode ever since. It’s time to try something new.

Also, reproductive rights organizations aren’t a monolith. Their political strategy is handed down from the top, rather than being formed through the consensus of all of their members, including clinic workers, whose opinions on clinic defense as a strategy really vary. Many are happy when we show up—and many patients are, too, along with neighbors who are tired of seeing bigotry go unopposed in their communities.

Finally: we are Planned Parenthood patients, abortion clinic workers, abortion doulas, and health care providers ourselves. We believe that we should have at least as much say in what the fight for abortion rights should look like as the well-paid administrators and consultants at the top of those organizations.

Doesn’t clinic defense lead to a bigger police presence in front of clinics?
It can; the antis are quick to call the police and the police are quick to defend them. But the bigger picture is that clinics have been highly policed and politicized spaces for years now, and that has everything to do with the right’s strategy of targeting clinics with escalating harassment and violence. We want cop-free, harassment-free clinics, and we won’t win that by staying home.